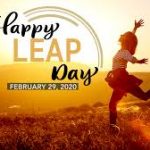 Nearly every four years, we add an extra day to the calendar in the form of February 29, also known as Leap Day. Put simply, these additional 24 hours are built into the calendar to ensure that it stays in line with the Earth’s movement around the Sun. While the modern calendar contains 365 days, the actual time it takes for Earth to orbit its star is slightly longer—roughly 365.2421 days. The difference might seem negligible, but over decades and centuries that missing quarter of a day per year can add up. To ensure consistency with the true astronomical year, it is necessary to periodically add in an extra day to make up the lost time and get the calendar back in synch with the heavens.

Many calendars, including the Hebrew, Chinese and Buddhist calendars, are lunisolar, meaning their dates indicate the position of the Moon as well as the position of Earth relative to the sun. Since there is a natural gap of roughly 11 days between a year as measured by lunar cycles and one measured by the Earth’s orbit, such calendars periodically require the addition of extra months, known as intercalary or interstitial months, to keep them on track.

Intercalary months, however, were not necessarily regular. Historians are still unclear as to how the early Romans kept track of their years, mostly because the Romans themselves may not have been entirely sure. It appears that the early Roman calendar consisted of ten months plus an ill-defined winter period, the varying length of which caused the calendar to become unpegged from the solar year. Eventually, this uncertain stretch of time was replaced by the new months of January and February, but the situation remained complicated. They employed a 23-day intercalary month known as Mercedonius to account for the difference between their year and the solar year, inserting it not between months but within the month of February for reasons that may have been related to lunar cycles.

To make matters even more confusing, the decision of when to hold Mercedonius often fell to the consuls, who used their ability to shorten or extend the year to their own political ends. As a result, by the time of Julius Caesar, the Roman year and the solar year were thoroughly out of sync.

2. Julius Caesar introduced Leap Day, with help from the Egyptians…

The Mercedonius-when-we-feel-like-it system apparently irked Caesar, the general-turned-consul-turned-dictator of Rome who drastically altered the course of European history. In addition to conquering Gaul and transforming Rome from a republic into an empire, Caesar re-ordered the Roman calendar, giving us the blueprint off of which much of the world still operates to this day.

During his time in Egypt, Caesar became convinced of the superiority of the Egyptian solar calendar, which featured 365 days and an occasional intercalary month which was inserted when astronomers observed the correct conditions in the stars. Caesar and the philosopher Sosigenes of Alexandria made one important modification: instead of relying on the stars, they would simply add a day to every fourth year. In keeping with the Roman tradition of messing with the length of February, that day would fall in the second month of the year—thus Leap Day was born. Caesar added two extra-long months to the year 46 BCE to make up for missed intercalations, and the Julian Calendar took effect on January 1st, 45 BCE.

3. …but their math was a little off

By the 16th century, scholars had noticed that time was still slipping—Caesar’s calculation that a year lasted 365.25 days was close, but still overestimated the solar year by 11 minutes. This was a problem for the Catholic Church, as the date of Easter had drifted away from its traditional place, the first Sunday after the first full moon following the vernal equinox, by roughly ten days. Pope Gregory XIII commissioned a modified calendar, one which kept Leap Day but accounted for the inaccuracy by eliminating it on centurial years not divisible by 400 (1700, 1800, and 1900 were not leap years, but 2000 was). The introduction of the Gregorian Calendar marked the last change to the Western calendar as we know it today.

Experts note that the Gregorian calculation of a solar year—365.2425 days—is still not perfect, and thus another correction will be necessary. Thankfully, the Gregorian calendar is only off by about one day every 3,030 years, so mankind has some time before this becomes a problem.

Curiously, many Leap Day customs have revolved around romance and marriage. Tradition holds that in 5th-century Ireland, St. Bridget lamented to St. Patrick that women were not allowed to propose marriage to men. So legend has it that St. Patrick designated the only day that does not occur annually, February 29, as a day on which women would be allowed to propose to men. In some places, Leap Day thus became known as Bachelor’s Day.

This tradition hopped the Irish Sea to Scotland and England, where the British added a twist—if a man rejected a woman’s proposal, he owed her a debt of several pairs of fine gloves, perhaps to hide the fact that she did not have an engagement ring. In Greek tradition, however, it is considered bad luck to marry on Leap Day, and statistics suggest that Greek couples continue to take this superstition seriously.

There are only about 5 million people in the whole world who were born on February 29, with the odds of being born on Leap Day standing at about 1-in-1,461. Several famous people—including actress and singer Dinah Shore (born 1916), motivational speaker Tony Robbins (born 1960) and hip-hop artist Ja Rule (born 1976)—are leaplings. Leaplings technically only get to celebrate their birthdays once every four years, but they do get to be part of an elite group.