Skip to content
HomeInternationalHilaree Nelson: Body of famed US climber found on Mt Manaslu in Himalayas 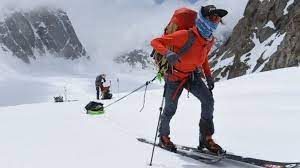 Nelson, 49, was descending the world’s eighth highest summit with her partner when she went missing on Monday.

Rescuers found her body on the south face of the 8,163m (26,781ft) peak on Wednesday. Earlier reports said she had fallen into a crevasse in a glacier.

Nelson was regarded as one of the finest mountaineers of her generation.

In 2018, she and her partner Jim Morrison became the first people to ski down Mount Lhotse in Nepal, the world’s fourth-highest peak.

She is also the first woman to climb both the world’s highest mountain, Everest, and Lhotse, which is adjacent, in a single 24-hour period.

Morrison and three Sherpa guides were dropped by helicopter to recover Nelson’s body from about 6,000m on Manaslu on Wednesday morning, expedition organisers said.

“The body has been brought to base camp. After completing necessary legal procedures, it will be airlifted to Kathmandu,” said Jiban Ghimire, managing director of Shangri-La Nepal Trek, the Kathmandu Post reported.

Earlier helicopter search attempts had been unsuccessful, and hampered by bad weather.

On the same day Nelson went missing, one person was killed and more than a dozen injured in an avalanche lower down on the same peak.

She is reported to have fallen into a deep crevasse in the ice only 15 minutes after reaching the summit of Manaslu, according to witnesses.

A local guide that had been working with the couple told Outside magazine that other climbers who were with them reported that “her ski blade skidded off and [she] fell off the other side of the peak”.